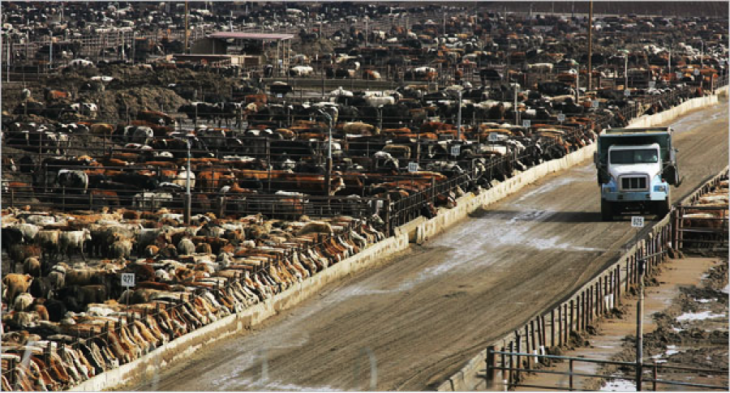 Food is often a topic that gets people very heated in debate. We eat it at least 2 times a day (sometimes 5!), it is essential for survival and it often shapes an incredibly important part of our social fabric: celebrations, artisanship, family time and caring for loved ones. Equally so, when we speak of the sustainability of our food system and the solutions to our food shortage, people are quick to opine and make big concluding statements on food affordability, availability, GM, organic certification, industrial food production, bio-tech, hydroponics. The list goes on. What is happening to our food system?

Many years ago I watched a compelling documentary called Food Inc that made me question how we build solutions to our food problems. The documentary showed an example of how a company found a solution to a recurring problem: e-coli in beef meat. E-coli is a substance created in the cow’s gut that, for whose eating its meat in quantity, can lead to death. The e-coli was said to be produced in a cow’s stomach in part due to the cow’s diet: cows are often now fed corn as opposed to the original grass-based diet, to fatten cows more quickly at a relatively inexpensive (and government subsidised) price. Apparently the problematic presence of e-coli could be resolved by allowing the animals to eat a plant based died for a week before butchering. Instead of taking a step back to avoid the problem altogether (e-coli due to corn-based diets), a company invented an industrial solution to removing the e-coli: washing the meat in ammonia. The final ’safe’ product was a pink slushy paste, that was then used for burger patty production. This struck me as crazy – we had reached a point where it was economically cheaper and better to over-engineer an additional technical step as opposed to simply scale back corn-based diets for a single week before butchering. It struck me that we weren’t solving the original problem at source, we were finding a patchy solution with unknown health consequences that was even leading to a bad-quality product (who wants slushy meat washed in ammonia?). That was the market’s solution. I started doing some research: there must be a different way.

Over the years, being an avid food lover and being concerned with issues of food sustainability in my work, I’ve come to see some creative and powerful alternatives to our current way of producing and thinking about food. I think sustainable (and non-industrialised) food production that is in harmony with the environment is not only effective, it is a necessary part of the solution. Simple, small and slow presents a compelling alternative to our current food production systems: often however seen with scepticism, I hope to break some of this down and shed some light on opportunity over the following blog entries.

PART 1. CHALLENGES OF OUR FOOD SYSTEM.

So, what is this the deal with food shortage? Currently, almost a billion people suffer from hunger due to food shortages: 1/9th of our global population is said to be clinically malnourished. Some of this is due to conflict but in most areas this is due to seasonal lack of availability: food runs out before the next harvest. And yet our population is still growing. It’s expected that an additional 2.4 billion by 2050 will have to be fed and will share the same limited resources on our planet, a 33% increase. Almost all of this population growth will be in developing countries who, with a rising middle class, are changing their food habits with an increase in demand for meat and dairy, products which require significantly more natural resources to produce. Adding to that demand, the increase in bio-fuels will put stress on the need to produce more grains. FAO’s chilling estimate is that by 2050 we will need increase food production by 70% (based on 2005-07 levels).

We must produce more food, is the obvious answer. To tackle this, our food system has taken multiple turns. For the most part, it has evolved into a powerful industrial global system. Technological innovation, opportunity for profit and also the rising demand for food range availability has created an elaborate global food supply chain. Let’s explore a couple of these trends:

Worryingly, there is a trend of over-engineering solutions as opposed to going back to first principles, rethinking the problematic and designing a better solution that builds into it the years of learning and discovery we have made on the side effects of the food industry. But a few creative companies however have started to find alternative solutions…

Check out next week for Part 2: “The opportunity in alternative food systems”.

Published by Francesca B // Activating Sustainability

Francesca is a professional working in the sustainability space with retail, consumer goods companies and primarily the agriculture sector. Views are her own. Francesca believes that we have some urgent work to do to re-think how our economy works in relations to the environment, community and innovation without environmental impacts. She is passionate about food sustainability, slow food, agriculture, international development, circular economy and innovation. View all posts by Francesca B // Activating Sustainability

5 thoughts on “The Challenge with Food: Part 1. Our Industrial Food System”